The most innovative, creative puppet maker in the world!

Folkmanis® Puppets believes imagination is the key to a healthy childhood, encouraging play and discovery to develop the skills necessary in life. The company has been making the most innovative and engaging specialty puppets in the world since 1976, delighting imaginations and winning nearly every industry, child development, and kid-tested award, many repeatedly.

From cottage industry to world leader.

Conceived as a “cottage industry” business in Watertown, MA., in the late 1960’s and nurtured among the street vendors lining Berkeley’s famed Telegraph Avenue, Folkmanis® Puppets are the expression of Judy Folkmanis’ active imagination, sewing wizardry, and love of nature.

Creating her first animal puppets to entertain her own children, Judy was astounded when her unsung, but cuddly, creations began attracting a growing group of paying customers. Most often these were other parents who sought high play value from their toy purchases and an appreciation of the natural world for their children.

Joined in the burgeoning endeavor in 1976 by her Ph.D. husband Atis—who happily abandoned a career in biochemistry for pattern-cutting—the couple realized that launching a menagerie of carefully detailed and realistic animal puppets was their “right livelihood.” They hired several seamstresses and never looked back. The rest, as they say, is toy industry history – as Folkmanis’ line and renown grew by leaps and bounds.

Still headquartered in Emeryville, California, today Folkmanis, Inc. has grown to become the premier manufacturer of plush puppets worldwide. Folkmanis® Puppets offers over 200 of the most heartwarming and realistically designed creatures—both exotic and familiar—on the market today. And, after more than 35 years, Folkmanis, Inc. is still a family business. Judy and Atis oversee both the creative and operations sides to ensure that the quality and love of the natural world they wish to convey through their toys remains true to their original vision. 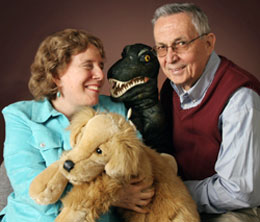 “The success that Folkmanis Puppets has enjoyed for more than 35 years simply reinforces the fact that when it comes to children, old-fashioned, open-ended play patterns are the best, and the simplest toys are really the healthiest gifts one can buy for a child,” says Elaine Kollias, marketing director. “That is why puppets are so firmly in the ‘good toy’ category – not just that they encourage and inspire imaginative play, but that they represent a thoughtful and fun gift that is more than ‘just’ a toy.”

Folkmanis Puppets encourage love of the natural world and environmental conservation.  Products are not individually packaged and the company recycles. The company headquarters installed solar panels to reduce the corporate carbon footprint.

Folkmanis, Inc., believes that toys and puppets are crucial for a healthy childhood and development.